On February 13, 2013, Bill O’Quin couldn’t find his 41-year-old son, David. He’d sometimes disappear for a day or two, but on the third day of his absence, O’Quin started calling local hospitals and precincts. None had a patient or inmate named David O’Quin. A jail in Baton Rouge, Louisiana, did book someone named David Rogers. “It turns out that’s the name David gave them,” responded O’Quin, though he has no idea why.

Officers had arrested David that day for disturbing the peace. He’d stopped taking his medication and was allegedly bothering residents in the neighborhood by cursing and screaming.

Instead of taking him to the nearby behavioral health emergency room that existed at the time, the police department transferred David to the East Baton Rouge Parish Prison.

In the early hours of his thirteenth day in pretrial detention, David died of cardiac arrest after languishing in restraints off and on for over 186 hours, sometimes 24-hours at a time. The autopsy report said he’d developed a bilateral pulmonary embolism, resulting from blood clots that had formed in the deep veins of his lower right leg. Both deep venous thrombosis and pulmonary embolism are well-known risks of physical restraint.

“I spoke with the prison’s staff regularly to see how my son was doing,” says O’Quin, “and they never mentioned he was in a restraint chair.” “It was awful—they restrained David nearly the entire time he was there.”

According to a 2018 report by the Promise of Justice Initiative, inmates at the East Baton Rouge Parish Prison die at a rate more than twice the national average.

In the years since his son’s death, O’Quin has meticulously tried to piece together David’s experience in the prison, chronologically weaving together administrative and incident reports, restraint logs, and medical records. On the prison intake, staff incorrectly wrote David’s last name as Quinn and listed his age as 24 years old instead of 41. From that point forward, all records referred to him as “Inmate Quinn.”

There are many gaps in the documentation, notes O’Quin. For example, eight out of David’s thirteen days in imprisonment are missing information from either the East Baton Rouge Sheriff’s Office or EMS. Oddly, it was the latter that provided medical care to inmates. The prison used to transport them to hospitals for most of their healthcare needs. However, because of privatization, in 2013, the East Baton Rouge Parish EMS began providing primary healthcare within the prison.

Despite missing details, what the records provide is a picture of some of what David endured. It also, says O’Quin, makes it undeniable that a prison is a dangerous place for a person in psychosis.

In October, Kevin Huckshorn, Ph.D. MSN, RN, CADC, told #CrisisTalk that correctional institutions are designed to contain and control people, not treat them or help them recover. And a person who doesn’t follow a guard’s directive, she pointed out, might find themselves in seclusion or restraint.

Because of missing documentation, it’s unclear whether staff restrained David on his first few days in the prison. However, the initial recorded restraint transpired on his fourth day. The log states David had shaken the cell bars and attempted to spit at jail staff. In response, staff sprayed three doses of pepper spray in David’s face, tasered him twice, handcuffed him, and put him in a restraint chair.

The days following reveal a similar pattern of staff tasering, pepper spraying, and restraining David in an effort to make a man in psychosis comply with their commands. On day six, the prison report reads: “Once Quinn calms down and begins to cooperate with us, he will be removed from the chair and be allowed to shower.”

O’Quin says prison staff dehumanized his son. “He was a person, but that’s not how they treated him.”

Until his death, David languished in prison for thirteen days on pretrial detention while awaiting due process for disturbing the peace, a misdemeanor in Louisiana.

In the United States, having a serious mental illness is a risk factor for incarceration. A study published in Psychiatric Services in 2019 found that people with SMI arrested for misdemeanors had more than a 50% increased likelihood of experiencing a jail sentence.

People amidst a behavioral health crisis, notes O’Quin, often have immense difficulty navigating the criminal justice system. Judge Steven Leifman told #CrisisTalk in 2019 that there are three kinds of people who remain in jail until their case is heard. Among them are people who have an attached felony, people who can’t afford to bond out, and those experiencing a mental health crisis and don’t know how to get out.

“There’s no way for a person in psychosis to advocate for themselves,” says O’Quin, “and a prison is not a treatment-focused or safe environment for them.”

Over the 15 years before David’s arrest in February 2013, there was no exact moment when O’Quin realized his son was struggling with a mental illness. “His decomposition was gradual,” he says. At the time, David was living in California. He’d stayed after receiving a Master of Fine Arts degree from the University of California, Los Angeles. “His life seemed to become increasingly chaotic,” says his father. “He was losing things and spending money unwisely.”

David began living in trucks, vans, or cars he bought. He then started telling his father that helicopters and birds were following him around Los Angeles and intelligence officials had implanted listening devices in his brain. David also started taking his clothes off in public. “He was more and more at odds with the authorities for disrupting neighbors or not paying tickets,” says O’Quin.

As David’s symptoms increased, so too did his interaction with the criminal justice system.

However, there was tremendous variability in what David experienced depending on who he encountered. Just a few months prior, Baton Rouge police officers identified that David was in crisis and took him to the Baton Rouge General Medical Center. “I don’t understand why the police officers who arrested him in February didn’t take him there or to the behavioral health emergency room at LSU’s Earl K. Long Medical Center,” says O’Quin.

When O’Quin later asked the Baton Rouge Police Department, the Sheriff’s Office, and EMS officials what their protocols were for psychiatric emergencies, their reply made it seem as if they didn’t have any. “Or if they did,” he says, “there wasn’t a concerted effort to ensure officers and prison staff knew what they were, nor what behavioral health crisis resources were available to them.”

He believes diversion and rapid access to treatment could have saved his son’s life. That’s why he took the settlements he received from the Sheriff’s Office and the East Baton Rouge Parish to fund a Baton Rouge Area Foundation initiative focused on pretrial diversion and recovery.

What resulted is the David O’Quin Pre-Trial Diversion and Recovery Program and the Bridge Center for Hope. “Both are what David desperately needed,” says O’Quin. The recovery center includes a 23-hour stabilization unit and 16-bed detox and psychiatric units.

Every day, O’Quin hands out bracelets to police officers. He makes them out of small wooden tiles. It’s an opportunity to thank the officers for their service and tell them about the diversion program and the Bridge Center. “They’re excited about both,” he says. “I aim to get the word out.”

In 2018, Baton Rouge residents voted for the Bridge Center property tax of $1.5 million for 10 years. “The voters of EBRP have built these facilities,” says O’Quin, “and I believe if you build it, they will come.” 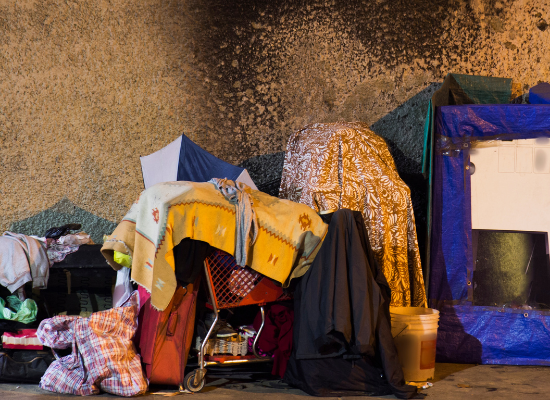