As communities explore ways to divert behavioral health and quality of life crises from law enforcement, they’re also asking when and how to best collaborate with police in the safest and least restrictive way for people in distress. This shift is necessary for people overall, says Dr. Margie Balfour, chief of quality and clinical innovation at Connections Health Solutions, but especially for those most at risk of police interactions turning deadly. She and her co-authors examine collaborative behavioral health crisis responses in a paper for the National Association of State Mental Health Program Directors, “Cops, Clinicians, or Both?”

How a community responds to behavioral health crises, write Dr. Balfour and her co-authors, is a matter of public health and social justice. The authors point out that people in crisis are frequently funneled to the emergency room—a place where they often face inadequate treatment and may languish for days waiting for a bed—or jail. They’re also at increased risk of death during a police interaction. “Racism and implicit bias magnify these problems for people of color,” write the authors.

Communities of color are especially vulnerable to lethal police interactions. According to the Washington Post’s police shooting database, 24% of people killed by police since January 1, 2015, were Black. The same database also reveals that 23% of people killed by police were identified as having a mental illness. Dr. Rebecca Neusteter, executive director at University of Chicago’s Health Lab and former policing program director at the Vera Institute of Justice, has said the 911 system works as it was designed to in the ‘60s: to quell disorder, particularly protests by Black communities, and function in an authoritarian way.

Across the United States, police frequently end up the default mental health responder because 911 is the emergency number people know to call, and law enforcement are GPS-enabled, allowing them to respond quickly. Dr. Balfour points out that as states build out their systems in preparation for 988, the three-digit number for behavioral health crises that must be live by July 16, 2022, they need to do a deep dive into how people enter their systems. That includes conducting a landscape analysis of all potential diversion points to ensure police can easily connect people to care, starting with 911 and the 988 crisis line. At each potential intersection, the goal is to continually push toward a clinician-only response, without law enforcement, as much as possible. “Without a crisis system to connect to, callers will still end up with a law enforcement response—which can be stigmatizing and dangerous—and be taken to jail or the emergency room,” she says.

A critical component of 988 is to quickly match people experiencing mental health, substance use, or suicide crises to the level of care they need and divert them from a traditional 911 response. Come July 16, 2022, all 988 calls will go to the SAMHSA-funded National Suicide Prevention Lifeline, commonly referred to as the Lifeline. However, at present, most behavioral health calls go to 911, not the Lifeline. That means it’s time communities take a look inside the black box of 911 call centers, how they code and dispatch calls, and how to divert on the same or compatible platforms.

Dr. Neusteter shared that 911 call classification codes are both over- and under-specific. In New York, she worked in a jurisdiction with 150 call-taking codes where the most frequently used code was “other.” When she and her former colleagues at the Vera Institute of Justice did a multicity 911 analysis evaluating call code inter-rater reliability, they found that two call takers weren’t likely to classify calls the same way. “In most cases, the call codes didn’t match up,” she said.

In Atlanta, Dr. Shila Hawk and Dr. Kevin Baldwin at Applied Research Services, Inc., analyzed 3.5 million 911 calls in the city’s metropolitan area and found that roughly 600,000 calls (18.4%) may have been suitable for diversion from 911. These calls were commonly logged as “suspicious person,” “criminal trespass,” or “street/sidewalk hazard.”

To foster partnership between behavioral health and first responders, the city of Austin has integrated expanded mobile crisis outreach team clinicians on the 911 call center floor. Call takers answer emergency calls by asking, “Are you calling for police, fire, EMS, or mental health services?” Co-location and working on the same platform as the call center, said Marisa Aguilar, LPC, practice manager of Integral Care’s EMCOT, has been transformative and allows for quick response times. “We’re taking two different disciplines and trying to foster a similar lens on how to respond to mental health crises,” she said. Working in the same space has also facilitated continued training and a seamless feedback loop on calls and call codes. “We’re just steps away, and they know they can come over and chat with us.”

In an email, Aguilar shared that her team does monthly reviews with the Austin Police Department on call code accuracy—calls that should have been coded as mental health but weren’t. The team also submits regular weekly reports to EMS so that their quality assurance can review calls.

Dr. Balfour says at every potential entry point, first responders must be able to easily and rapidly connect people to treatment. That might include co-location like at the 911 call center in Austin but also consistent and constant access to mobile crisis teams and crisis facilities, including crisis receiving facilities, Living Room community crisis centers, detoxification centers, sobering centers, and crisis clinics or mental health urgent care centers. “We need to provide first responders 24/7 availability, faster drop-off times than jail, and a ‘no wrong door’ approach,” she says.

Even knowing who does what role, when a person is in crisis, must be predetermined. During a crisis is not the time to figure it out, said Dr. Debra A. Pinals, clinical professor of psychiatry and director of the Psychiatry, Law, and Ethics program at the University of Michigan. A crisis response with multiple partners can be like a dance that hasn’t been adequately choreographed. She said that lack of coordination or clearly defined roles adversely affects how crisis scenes are managed and outcomes. But when crisis partnerships and collaborations work, it’s remarkable to witness.

In Tucson, police and behavioral health crisis providers have worked together for over 15 years to perfect their choreography. “We’ve evolved to a model where law enforcement’s role is focused on safety,” says Dr. Balfour. “The system is set up to funnel calls to the mental health system—crisis line, mobile teams, facilities like our Crisis Response Center—as much as possible. If law enforcement does need to be involved, they step back and let clinicians do their work as soon as safety is established.” Safety, though, can mean something entirely different to traditional first responders than it does to those who provide mental health crisis services. Coming up with a shared language, she notes, takes time and dialogue. It also requires trust.

In June 2019, retired Arizona police officer Nick Margiotta told #CrisisTalk that law enforcement won’t reach out to inconsistent crisis providers. “That’s a no-no in our culture; officers will stop calling,” he said. Law enforcement need a no-refusal policy, allowing them to do drop-offs and quickly return to their patrol duties. That’s why, notes Dr. Balfour, behavioral health facilities must have a no-refusal policy.

Throughout the U.S., crisis facilities often require police officers to stop at the hospital emergency department to obtain medical clearance. Once at the behavioral health crisis facility, they face more hurdles: staff refusing patients because they’re intoxicated or agitated and instructing officers to remove their guns and use the front door for drop-offs. “If I’m going to get medically screened out and have to put the person back in my car and drive him somewhere else, why should I even bother going there in the first place?” asked Margiotta.

“These barriers,” says Dr. Balfour, “make jail the path of least resistance.” Conversely, a “no wrong door” approach creates a reliable option for police, reduces the time police spend on mental health calls, and diverts people from the emergency department—where they might experience psychiatric boarding—and jail.

First responders need the same dependability and responsiveness from mobile crisis teams, says Dr. Balfour. That includes a rapid 24/7 response. For example, when officers in Rochester, New York, handcuffed, pepper-sprayed, and put a nine-year-old in crisis in the backseat of a police vehicle, people in the community asked, “Where was mobile crisis?” The mobile crisis team (the Forensic Intervention Team) had been available. However, police chiefs stated that officers often couldn’t get anyone from FIT to respond to calls. At the time, the service, which is expanding, was made up of two clinicians who worked five days a week, Monday through Friday. They weren’t available on weekends. James Van Brederode, a Monroe County police chief, said mobile crisis services need to be available 24/7—every single day of the year. Otherwise, it’s just “window dressing.”

Where mobile crisis services are located, says Dr. Balfour, can also impact response times. Communities often benefit from having a centralized dispatch for mobile crisis teams, while those in rural areas might do best with a dispersed approach that’s centrally coordinated. Thanks to GPS-enabled mobile phone software, in Tucson, mobile crisis dispatchers can see the location of each mobile crisis team and their status. The NASMHPD paper states the system is akin to those used by app-based ride-hailing tech companies like Uber and Lyft. “That allows the call centers to see where teams are—not only geographically but also their status, like whether they’ve just begun or are finishing up assisting a person in crisis,” she says.

The partnerships between first responders and behavioral health crisis services in Tucson have, in part, been successful because it’s an ongoing endeavor that each is invested in. They meet regularly to go over data like 911 behavioral health calls and call coding, mobile crisis response times, and crisis facility drop-off times, which should take less than seven to eight minutes. The partners also have a shared ethos regarding behavioral health crises, resulting in the Tucson Police Department developing clear policies and procedures on the use of force. For example, officers don’t have to handcuff people when taking them to a crisis center. “The goal is to use the least restrictive approach whenever possible,” says Dr. Balfour.

The vast majority of officers in Tucson are CIT (Crisis Intervention Team) trained. The application of CIT is so pervasive and effective that over half—60%—of police drop-offs to Connections Health Solutions’ crisis center are voluntary. The law enforcement culture in Tucson, points out Dr. Balfour, is to be “guardians, not warriors.” “Guardians see community safety through a public health lens, while the warrior approach is more militaristic and enforcement focused,” she says. “Police in Tucson believe they help the community by helping its members get the treatment they need.”

The culture shift and partnerships that must happen between mental health crisis service providers and first responders might seem lofty, even unattainable, but Dr. Balfour points to the aphorism “a rising tide lifts all boats.” “Once one provider and the police department build a relationship, other providers realize they can develop one too.”

Read the full “Cops, Clinicians, or Both? Collaborative Approaches to Responding to Behavioral Health Emergencies” report.

Whether in Person or Virtual, Schools Can Focus on Mental Health 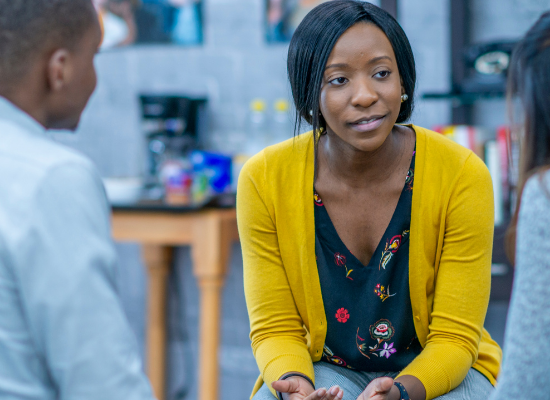 The Chronic Misunderstanding of the Peer Role in Behavioral Health